Latanya Nelson was born in Page, AZ on Aug. 14, 1992 to Leroy and Lori Nelson. The only daughter in her family, she is Navajo- of the Reed People Clan, the White Corn Clan, the Edgewater Clan, and the Red House Clan. She has two older brothers, Aleron and Alfred, whom she looks up to for advice and inspiration. Her grandparents are Mabell Clamity, John Josley and Grace Nelson.

Latanya has lived in Shonto, AZ for the majority of her 16 years. She attended Kaibeto Boarding School in Kaibeto, AZ before attending Sherman Indian High School. Although she has only attended Native American schools, Sherman is the first school that required she leave home. Growing up in Native schools helped further ground her in Native American traditions, those that were taught to her by her parents and grandparents.

Latanya has always been polite and respectful, qualities that have earned the respect of her family members. She has been a good student as well- being quite the speller almost brought her to Washington for a spelling bee during grade school.

Latanya looks forward to her fourth and final year at Sherman Indian High School. At SIHS, she is a member of the Cross Country and Track Teams, as well as SIHS Honor Roll. Latanya served two years on the Marine Cadets program on campus, as well as one year as a Dawaki Dorm Leader. In April 2009, Latanya won the title of Miss Sherman Indian High School 2009- 2010, after performing the traditional Navajo Sash Belt Dance and delivering a strong speech at the annual Miss Sherman Pageant.

When she is not at school, doing her many things she does there, she enjoys spending time with her family and friends back at home. If she is asked who her best friends are, she will respond that she is most close to her family.

Latanya says Sherman has made a big impact on her life- it taught her to become independent, learn responsibilities, and to take big steps for herself. She is looking forward to next school year- her senior year- and graduating. She has hope to one day make films- about dirt bikes, in particular, which is an interest her older brothers had a part in making.

THE 2009- 2010 MISS SHERMAN
RIVERSIDE, CA., June 8, 2009 – Sherman Indian High School (SIHS) administration, faculty, staff and students are proud to officially announce the new Miss Sherman for the 2009- 2010 school year. Latanya Nelson, 16, was the reigning candidate in this year’s annual Miss Sherman Pageant, held in April 2009. Nelson will be responsible for setting a model example for other students and representing SIHS in the public eye at cultural activities, conferences and other events for the entire coming school year, which begins in mid-August 2009.

Nelson comes from the Navajo Nation in Shonto, AZ. She will be a senior during her reign, a year in which she looks forward to experiencing new things. She speaks Navajo fluently and does not hesitate to tell others how much she cares for her family and friends. Although she grew up attending entirely Native American schools, SIHS is the first that required her to leave home. Nelson won the pageant with an outstanding performance of the traditional Navajo Sash Belt Dance, and a strong execution of a confident speech. Pageant runner-up was candidate Celeste Contreras from the Tohono O’odham Nation, also in Arizona. 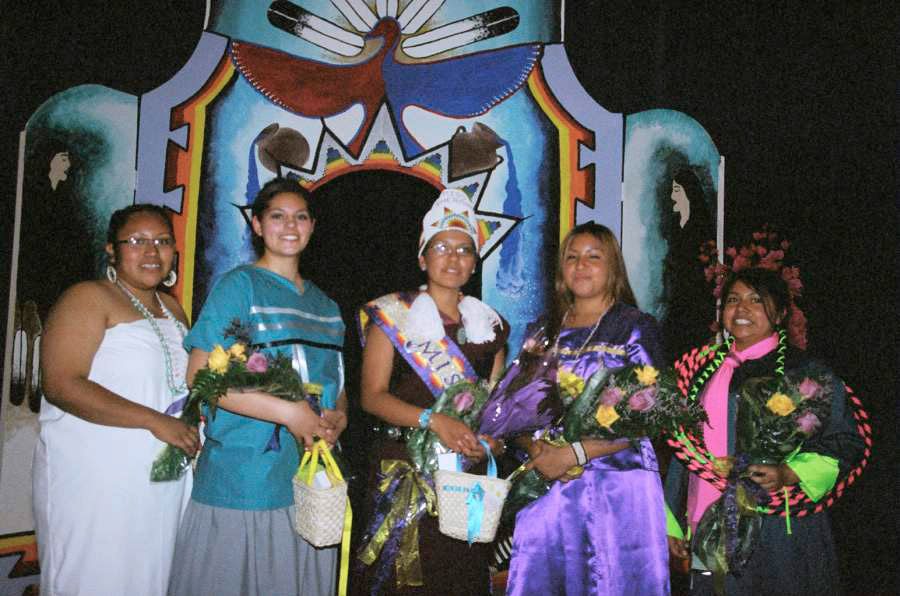 The Miss Sherman Pageant began in coordination with the Sherman Indian High School Annual Powwow in 1986. Since its inception until present, the categories of the pageant have included: presentation of traditional regalia, traditional talent performance, formal wear, and speech performance. Home Living Assistant Ruth Austin, now retired, coordinated the pageant for many years, but it has since become tradition for the candidate’s sponsor to plan the event at the end of her candidate’s reign. Nelson’s sponsor is Stephanie Mushrush from the Washoe Tribe of NV and CA, who works at SIHS as a Home Living Assistant in Dawaki Dorm.
Past Miss Sherman’s have gone on to succeed academically- graduating from colleges and universities, and culturally- raising children of their own in respect of the Native American culture and traditions. Many have gone on to work for their own tribes and nations, and say that the title “Miss Sherman” never expires, and has helped them in their journey.

“Sherman has made a big impact on my life. It has taught me to take big steps for myself,” said Nelson.