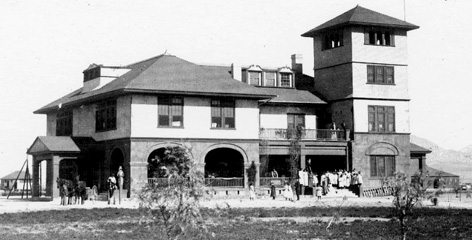 In 1897 Superintendent Harwood Hall realized the need for a better location, as the water supply at Perris was inadequate. Mr. Hall appealed to James Schoolcraft Sherman, Chairman of Indian Affairs in the U.S. House of Representatives and later U.S. Vice President, for funds to build a school in the area of Riverside, Ca. On May 31, 1900, Congress authorized $75,000 for the construction of Sherman Institute on its present site.

On July 18, 1901, the cornerstone of the old school building was laid. The school was named for Mr. Sherman who had been responsible for making this project a reality. Nine buildings were completed and officially accepted in May 1902. In the fall of 1902, eight grades were in operation. Agriculture and industrial arts programs were added later to the school’s curriculum.

By 1908, 550 students were enrolled, using 34 buildings. A junior high school program was in effect, and was comprised of academic subjects and industrial training such as carpentry, painting, cabinetmaking, black-smithing, wagon making, shoe and harness shops, tailoring, agriculture, home economics, and home nursing. The “outing system” was inaugurated at that time.

The Sherman Farm of 110 acres, near the present community of Home Gardens on Magnolia Ave, was not only a training ground, but also a source of food for the school. The government no longer owns the property; however, a small area is set aside as a school cemetery and is owned by the U.S. Government.

In 1909, 43 tribes were represented on the school roll, with Indians not only from California, but also from the Pacific Northwest, southwest, and the Plains. Education was limited to grades one to eight at that time. Later, in 1916, pupils were enrolled in grades one to ten. By 1926, the school offered a complete elementary and high school curriculum, as well as a course in cosmetology. The enrollment had reached 1,000 students. An enrollment of 1,256 was recorded in 1930, and in 1932 Sherman became an accredited high school. During the depression years, from 1930 to 1936, the enrollment decreased. California Indians became integrated into public schools. 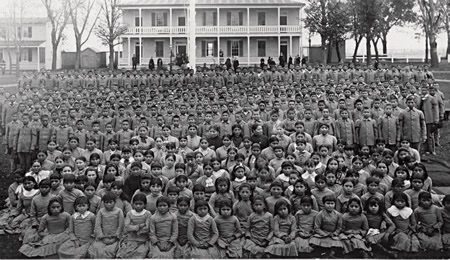 Indian Students in the USA

In 1946 the desperate need for education among the Navajos guaranteed the continuance of Sherman as an educational institution. October 1946 marked the opening of the Special Program to 350 Navajo young people, age 12 to 20, who had never experienced a formal education. By 1948 the regular elementary and high school programs were discontinued. The Special Program was in operation for more than 15 years. Each year the school made gradual changed to meet the needs of the students. During this time no California Indians were permitted at the school.

In the fall of 1963 the ninth and tenth grades were revived. Sherman re-opened enrollment to other tribes, including California Indian tribes. The school again moved in the direction of a high school program, adding a grade each year until the school began graduating classes in 1966.

In 1967 eight buildings were deemed unable to withstand a major earthquake. One of the last buildings to be razed was the old school building in 1970. The old cornerstone from this building and its contents were saved and placed in Sherman Museum (old Administrative Building), the last of the original buildings. In 1971, Sherman was re-accredited as a high school, and became known as Sherman Indian High School.

The museum houses records from the school’s early days to the present. Over 2,000 catalogued items or artifacts of American Indian origin are housed there. These items were acquired from friends of the school and museum. In 1974, the Sherman Indian Museum was designated as a Riverside Cultural Heritage Landmark. It was entered into the National Register of Historic Places in 1980.

At present day Sherman, the school hosts an average of 300 to 500 students who come from reservations spanning the United States. Any student who is a tribal member of a federally-recognized tribe with at least one-fourth blood quantum may apply to attend. The school is funded entirely by the United States Department of the Interior, Bureau of Indian Affairs, and the Bureau of Indian Education. Attendance is free of charge.

Sherman enforced a Reduction In Force of employees in the spring of 2009, due to budget constraints. Approximately 34 employees were laid off. Despite this, Sherman faculty and staff still work to provide a safe, healthy and productive site for their Native American students. -Stephanie Mushrush